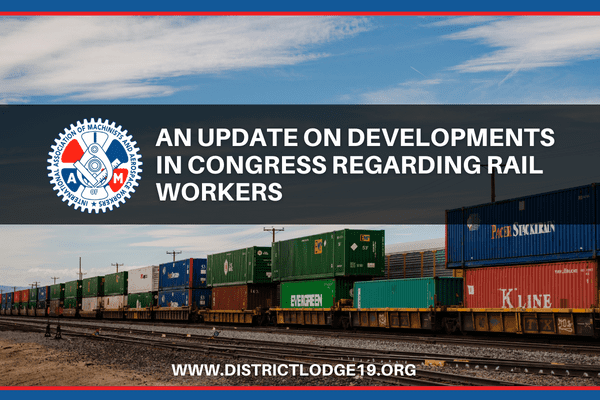 Our rail industry has been the main topic in the halls of Congress and in living rooms throughout the country.

On Wednesday, the U.S. House of Representatives passed a bill that, if signed into law, would enforce the tentative agreement reached with the National Carriers’Conference Committee (NCCC) and four unions under the Presidential Emergency Board (PEB). The bill passed by a vote of 290-137.

As you may know, the agreement District 19 members ratified goes further than the tentative agreement imposed by Congress. Congress also passed a separate bill to provide seven days of paid sick leave by a vote of 221-207, with every Democrat and three Republicans voting “yes” for paid sick days. Both bills now go to the U.S. Senate.

Please know that our ratified agreement stays in place despite what happens in Congress, but we would get the paid sick leave benefit if it is signed into law.

As we have said all along, we deserve paid sick days. Your union is working with the IAM Legislative and Political Department to urge Senators to vote “yes” on the House-passed measure to grant rail workers seven paid sick days per year.

Your union will also continue to set the record straight on fact and fiction. It has always been the opinion of your negotiating committee that it works best when members ratify their agreement, not members of Congress. Our ratified agreement is a good example.

We are committed to having these challenging discussions and will work to ensure everyone gets the respect and dignity they deserve.

To achieve our goals, we must stick together. Our union needs solidarity now more than ever. Your District 19 leadership is still confident that our agreement was the best we could achieve in this environment. We currently have the best-ratified agreement in all of the freight rail. It is now up to all of us to build on this agreement to address some of the outstanding issues in our industry.

Highlights of the improved Ratified Agreement include:

In solidarity,
The IAM Rail Division and IAM District 19