Our Power to Strike Remains Strong 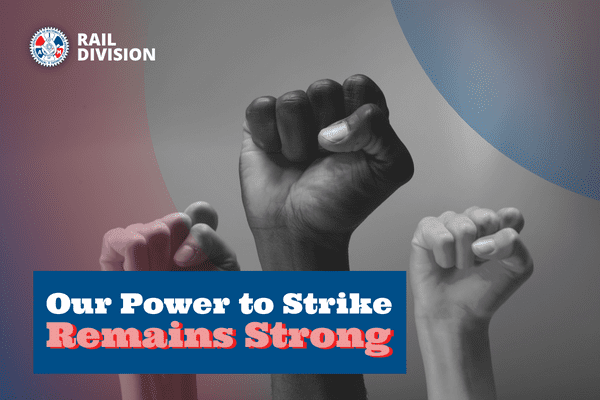 Our members’ voices were heard loud and clear by your negotiating committee and, more importantly, by the rail carriers. We are writing to explain that with such a strong show of solidarity, there is no need to conduct a third strike vote. Your previous votes are sufficient under the IAMAW constitution to authorize District 19 to pursue strike action when necessary.

By standing firm, IAM District Lodge 19 has achieved more than any other union in the history of rail negotiations. We have secured a better tentative agreement than the Presidential Emergency Board (PEB) 250 recommendation and this was accomplished by standing together and demanding more.

We would like to look back at how we got here. In July 2022, DL 19 conducted an electronic and secret ballot strike authorization vote prior to the establishment of PEB 250. Your negotiating committee needed to fully understand the commitment of the membership in case the President failed to establish a Presidential Emergency Board.

Of those who participated in the strike authorization vote, 99.4% of the membership voted in favor of authorizing a strike. As we know, President Biden did in fact establish PEB 250 on July 18, 2022.

Directly after PEB 250 announced its recommendation, the IAM Rail Division demanded the carriers return to the bargaining table. We were back at the table the very next day. We remained at the table until a tentative agreement {TA) was agreed to on August 29, 2022. DL 19 conducted a membership vote on the TA from September 9 to 13, 2022. At that time, a second secret ballot strike authorization vote was taken. The TA was rejected with over 89% of our members voting in favor of the strike authorization.

As stated earlier there is no need to conduct a third strike vote and by demanding more, DL19 has been able to achieve more than the other unions.

In the coming days you will be faced with another ratification vote. DL 19 has made history by achieving an agreement greater than the PEB 250 recommendation. I urge each of you to review the TA and vote yes to ratify the agreement.