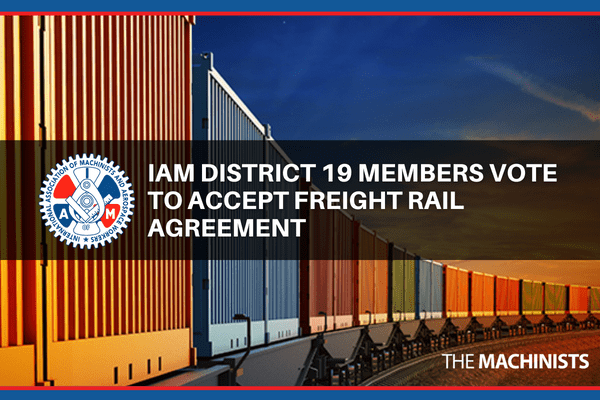 Approximately 4,900 members of the International Association of Machinists and Aerospace Workers (IAM) District 19 have voted to accept the latest Tentative Agreement with the National Carriers’ Conference Committee (NCCC).

“IAM District 19 members have accepted the Tentative Agreement. We are confident that this is the best deal for our members. District 19 leadership worked day and night to communicate the agreement’s benefits and what would happen if it was rejected.

“With 59% of the membership participating in the vote, the agreement was ratified with 52% of voting members accepting the agreement.

“Our union recognizes that the agreement wasn’t accepted overwhelmingly, so our team will continue conversing with our members at our rail yards across the nation. This agreement is the first step in addressing some of the issues in our industry. Our fight was able to shine a light on the work-life balance issues as well as the lack of proper paid sick leave. Our union will continue to amplify the deficiencies in the carriers’ sick leave and attendance policies. We want to thank IAM International President Robert Martinez Jr. for his steady leadership and counsel throughout this process.

“We look forward to sitting down with the carriers to find a solution to the overtime policies in our industry. The IAM is grateful for the support of President Biden, Secretary of Labor Walsh, and other allies for creating the space that allowed us to work towards a solution for our members. This agreement is essential in giving our members the respect and dignity they have earned during their careers.”

Highlights of the improved Ratified Agreement include:

Our Power to Strike Remains Strong